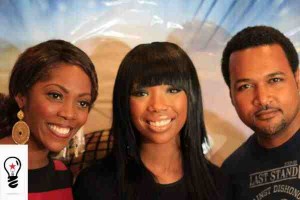 American diva, Brandy has revealed her desire to work with Nigerian songstress, Tiwa Savage. This she revealed While addressing journalists at a press conference held in Lagos.

Brandy disclosed that she has admiration for Tiwa Savage, adding that the Nigerian songstress has an ‘amazing voice’.

The American said she wouldn’t mind to do a song with Tiwa Savage, who used to be a back-up singer for Mary J Blige, another popular American female music star.

‘I like her and she has an amazing voice. Please, when you see her, tell her I would like to have her doing a song with me. She is a fantastic singer,’ Brandy told journalists at the briefing.

Tiwa Savage returned to Nigeria few years ago. She reportedly dumped a banking job in the United Kingdom to pursue a career in music in Nigeria. She is a Brand Ambassador for Pepsi, Etisalat and Forte Oil, which she sealed few days ago.

Tiwa Savage is married to her manager, Tunji Balogun, aka Tee Billz.

Just a reminder: The beautiful lady was involved in a mess with the police some days ago, when she reportedly removed the cap of a police officer, who had stopped her for breaking traffic law in front of Eko Hotel and Suites, Lagos.