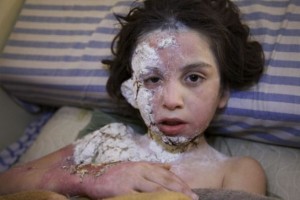 Syria’s 3-year war has seen children tortured, maimed and s*xually abused, crimes allegedly committed by President Bashar Assad’s forces. Others were recruited as soldiers by rebels in their bid to unseat Assad, according to a UN report.

The report, covering the period from March 2011 to November 2013, lists a litany of horrors that Syria’s children have suffered during the conflict.

The UN said government forces have been responsible for the arrest, arbitrary detention, ill treatment and torture of children, with some as young as 11 detained by the authorities on suspicion of having links with armed groups.

It was not clear what methodology was used and the summary of the report posted on the UN website late on Tuesday did not say how investigators obtained their information.

Allegations of sexual violence by opposition groups were also received, but the UN was unable to further investigate them due to lack of access to areas in under rebel control, the report says.

While Assad’s forces have used children as human shields in the fighting, the report also blasted rebels for “recruitment and use of children both in combat and support roles, as well as for conducting military operations.”