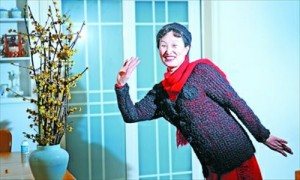 Xiang Renxian, a 60-year-old retired schoolteacher from Chongqing, China, has spent the last 11 years weaving a coat and a hat out of her own hair for her husband. She had started collecting strands of her hair as they naturally fell out since she was 34.

“Throughout my youth I was always famous for my wonderful long hair, and as I grew older I realized that, just like my looks, my hair was losing its luster,” she said. “Many people envied my long, shiny black hair so I wanted to keep them, even the dropped threads.”

For a long time, Xiang just collected her hair but had no idea what to do with it. It was only in 2003 that she decided to weave it into clothing. “I wanted to find a way to preserve that, and came up with the idea of using it to create something for my husband. It took a while to perfect the techniques, it was only when I was 49 that I started to work on this project. Once I got into the technique that I developed, it was actually not difficult to do, you just need patience and I knew that I had the time.”

The coat was Xiang’s first project, for which she used 15 pieces of hair as one strand of standard wool. She began in 2003 and managed to finish the main body only by 2008. Later, she started weaving the hat, with 20 pieces of hair per strand. This she completed in 2011. “It takes great patience as the weaving work could only be done a bit each day due to the scarcity of hair,” she said.

When the weaving was complete, she felt that the coat needed a bit of a finishing touch. So she decided to weave her name and the date of completion on to the cuffs in white. She had to wait until the end of last year to collect enough grey hair for her signature.

Apart from weaving, Xiang also counts the number of hairs she collects. “Over 11 years, I counted all the hairs that I collected and used on the coat so I know that I used 116,058, with the coat weighing 382.3g and the hat weighing 119.5g,” she said.

Even though the garments are meant as gifts for her husband, Xiang does not reveal his reaction. In fact, all the pictures show her posing in the black coat and hat; he is nowhere to be seen. Well, maybe he’s just camera shy. “Whatever happens to my hair in the future, I now know that this will always be there as a reminder of my youth and the many good memories my husband and I shared at the time,” Xiang said.

She isn’t quite sure about her next project, but it’s definitely going to contain more of her hair.

Though impressive, Xiang’s creations don’t even come close to the coat made out of over a million strands of human hair that we featured back in 2010.

Share
Facebook
Twitter
WhatsApp
Previous articleFormer US Marine Left Everything Behind to Live in the Forest, Barefoot
Next articleJapanese Researcher Uses Experiments to Prove Our Thoughts and Intentions Can Alter the Physical World
- Advertisement -