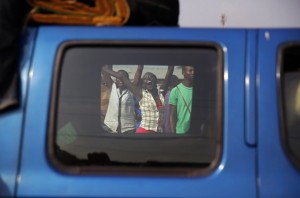 Months of violence targeting Muslims accused of supporting former president, who is also a former rebel leader, has ended in Muslims, who were hardest hit in the violence, leaving the Central African Republic.

One man who fell off a truck in Bangui on Friday was subsequently killed and his body mutilated.

The convoy of fleeing Muslims which was made up of some 500 cars, trucks and motorcycles, was guarded by heavily-armed soldiers from Chad, a neighbouring and predominantly Muslim country.

In recent weeks, angry mobs have set fire to mosques and have killed and mutilated Muslims. On Wednesday, one Muslim suspected of having aided last year’s rebellion was attacked for 15 minutes with knives, bricks and fee.

“It really is a horrific situation. All over Bangui, entire Muslim neighbourhoods are being destroyed and emptied,” said Peter Bouckaert, emergencies director for Human Rights Watch, who has helped trapped Muslims to safety under the guard of peacekeepers.

“Their buildings are being destroyed and being taken apart, brick by brick, roof by roof, to wipe out any sign of their once existence in this country,” Bouckaert said.

Thousands have died in the crisis