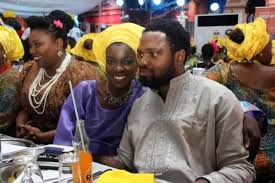 You got married in 2010. How did you woo your wife? Wooing my wife was a special task because she is a special woman; a woman who knows exactly what she wants and would not settle for anything less. I happened to be her first boyfriend and you can imagine how much work I had to do for someone who had made up her mind that she would only date the person she intended marrying. It was a tough process, but I was willing to go through. There were times I had to fly from Lagos to Abuja and fly back in the evening just to be with her. I would do that over and over again. I sent her flowers because it did not have to be a special day, either Valentine’s Day or Christmas Day. I spent a lot of time listening to her because that is pretty important to her. I sensed that I think that played an important part in our relationship. We also always went out to eat. We both love fine-dining, and wherever in the world we go to, we are always looking for that hot spot. We went to nice places, not so nice places, in fact, all kinds of places.

How did you propose to her?

I proposed to her after we had gone prayer-walking by a lake. I had the ring in my pocket; I had bought that ring in Dallas (Texas, United States) because she had seen it and liked it. Somehow we fought over it; maybe because she knew I was going to buy it.

Why did you both fight?

She was a bit apprehensive and wanted to take her time and I wanted to push it. I always want to ‘go’, but she always wants to take her time. So, I went down on one knee and asked her to marry me, at the lake, and it was a big surprise to her. We celebrated afterwards and I really enjoyed it. It just made my day because it was on Valentine’s Day.

What was her parents’ reaction when she told them she was going to marry you?

I have heard of the things that blind people have had to do to get married. You know, they run out of Nigeria, change statuses and other things; but my parents-in-law are proud of our relationship. They show us off and I am super-proud of them. Obviously, when one’s daughter comes to her parents and says she wants to get married, there is that apprehension; they would want to know whether you can take care of their child or not. And I think to them, they had the basic concerns every parent would have. Also, in view of my being visually impaired, they had certain questions like wanting to know how I would manage life and manage life with her. They have been very supportive. I have come to know my wife’s parents as my own parents as well. I can say this with every sense of honesty, that my wife’s parents are absolutely amazing people.

Who was your first love? Oh my goodness (laughs)! I can’t mention her name, so what do you want to know about her?

What attracted you to her? I was in love with the idea of love.

So, what broke the relationship?

I’m not sure we both knew what we wanted; we were just crazy. I am a diehard romantic.

Do you sometimes wish you knew what your wife looks like, physically?

I know what she looks like; she is my wife, and I would relate with her more closely than I would with anyone else. So, it’s very easy for me to have a physical imprint of her face and every other thing that has to do with her than anyone else. I don’t wish I did, because I feel like I know what she looks like. However, if that would make her happy for me to see her, that is something I would like to happen. I don’t think it’s something to lose sweat over.

You said she likes the fact that you have a good listening ear? But what did she say attracted her to you?