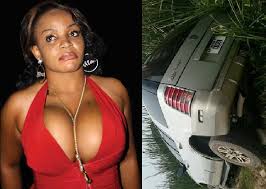 Cossy Orjiakor has narrated how she was involved in an auto accident some days back while driving to give a fan a reward for answering the question she asked on her Twitter page.

It was reported that she was on high speed when she ran into a ditch, though she was not injured but the car was pretty damaged.

She said “I thank God it was not too serious and I was not injured. I was on my way to drop off a gift for a fan who got a question right on my twitter handle. I didn’t know the ditch was deep until my jeep fell inside. Thank God, I was the only one inside. I tried to get a truck to pull it out but it took a bit of time. I guess that was when some people took the picture.”

She denied that she was on high speed. “That is not true, I wasn’t speeding.”

About the state of the car, “The bumper was affected likewise the passenger’s seat. My mechanic had to work on those sides, that was all. “It is good to trust in God. I know He is a good God. I am really grateful to Him, it wasn’t something that was very serious. We should always rely on God and put Him first.”