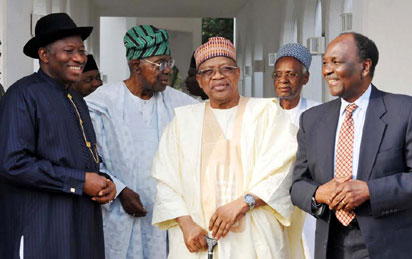 The Council of State on Tuesday in Abuja endorsed the proposed national conference and assured the federal government of its maximum support to ensure the event’s success.

Gov. Rochas Okorocha of Imo announced this to State House correspondents after the council’s meeting presided over by President Goodluck Jonathan at the Presidential Villa.

Fielding questions from newsmen after the six-hour meeting, Okorocha said the council commended Jonathan for initiating the conference.

He said Imo would send delegates to the conference in spite of the fact that his party, the APC, was yet to take a position on sending delegates to it.

“We discussed the national conference, which we see as a welcome development. The conference is a good development. Discussions at the meeting were also not along party lines”, Okorocha said.

The governor said the council admonished politicians to guard against provocative utterances which could tear the country apart ahead of the 2015 general elections.

“We have to adopt some new strategies on how to move the nation forward. Politicians have been warned against unguarded utterances, so as not to heat up the polity”, he said.

Okorocha also said the meeting had helped to resolve a lot of issues, adding that the meeting also adopted some new strategies for tackling security issues in the country.

Speaking also, Gov. Gabriel Suswam of Benue said President Jonathan presented a list of the new Chairman and members of the National Population Commission (NPC) to the council for approval.

He disclosed that the National Security Adviser also briefed on the general security situation in the country, with all council members contributing on how to move the nation forward.

“Decisions were taken to address some of the security issues which are affecting the country.

“The council took note and agreed that people should be more careful about what they say as public office-holders”, he said.

The News Agency of Nigeria (NAN) reports that three former Heads of State, Yakubu Gowon, Ibrahim Babangida and Abdusalami Abubakar, were at the meeting.

NAN reports that 20 state governors attended the meeting, while others were represented by their deputies.

The council is an organ of the Nigerian Government, with the statutory function of advising the executive arm of government on policies.

Other members include former Presidents and Heads of State, and all former Chief Justices of Nigeria.

The Senate President, the Speaker of the House of Representatives, all incumbent state governors and the Attorney-General of the Federation (AGF) are also members.

The council advises the President in the exercise of his powers, with respect to the prerogative of mercy and award of national honours.

It also offers advice to the President on issues of elections, judiciary, census and appointment of members of INEC, National Judicial Commission (NJC) and the NPC.

Also, the council advises the President on the maintenance of public order within the federation or any parts thereof and on such other matters as the President may request. (NAN)