Home Uncategorized Customer Trapped INSIDE Bank After Staff Left Her Inside and Locked Up...
Facebook
Twitter
WhatsApp 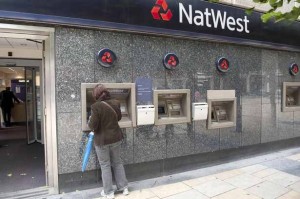 A furious customer was locked inside a Natwest branch for an hour and a half after being left in a side room while the bank closed.

Natwest has launched an investigation after the customer popped in just before 5pm to make an enquiry about her account.

The manager of the branch in Waterloo, central London, let the woman phone the bank’s central customer services department in a quiet side room.

But after being kept on hold, the customer went to alert the manager that she hadn’t been able to get through, only to find she was all alone in a locked bank.

The woman, who has asked to remain anonymous, said: “I was calling out when I noticed the alarms were going off.

“I thought to myself, ‘What’s going on?’ It was then I realised that I’d been locked in. Every time I went towards the doors the alarms kept getting louder and louder.

“I rang the police and told them I was locked in a bank. They said they wouldn’t be able to send anybody round for 60 minutes.”

The customer eventually contacted the bank’s alarm control – where she says she was told to see if she could find her own way out via the fire exit.

She said: “I wasn’t going to do that. For all I know my fingerprints would be left all over the bank. I told them I was staying put.”

She said she was told that the bank’s managers had been told to return to the branch – but that it would take them at least an hour.

The customer was finally released at 7.15pm – 90 minutes later – by a delivery man.

She said: “It’s unbelievable, it’s surreal. I’ve never come across anything like it. The bank needs to be much more professional.”

A spokeswoman for RBS, which owns Natwest, said: “This evening a customer was accidentally locked in a branch after it had closed. As soon as we became aware arrangements were made to let the customer out. We apologise to the customer involved, and are investigating how this occurred.”