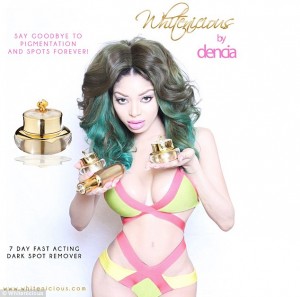 Just when I thought all the drama surrounding Dencia’s ‘Whitenicious’ has ended, I came across this long article online.

Read the entire review below: –

Dencia seems to be getting in the spotlight over controversies from critics who don’t seem to be in support of her Whitenicious skincare product. DailyMail in a recent article decided to take an indepth look on her beauty product and controversies surrounding it. Here’s how they’re reporting it below;

A Nigerian and Cameroonian pop star who launched a skin cream called Whitenicious has defended her product after critics branded it an ‘abomination’ for promoting skin-bleaching.
In an interview with Ebony, Dencia claims that the skincare cream is intended to remove dark spots, and that it is out of her control if customers use it to whiten their entire skin.
Defending her own drastically altered appearance since she started using Whitenicious, the singer asserts: ‘I was never that dark in real life… And guess what? I don’t even care because [critics] are bringing me business.’

According to the product website, Whitenicious – which bears the slogan, ‘Say goodbye to pigmentation and spots forever’ – effectively lightens skin in just seven days.

Skin bleaching is a growing trend in Dencia’s native West Africa, and critics are angered that it appears she is promoting it with her product.

Specifically, the pop star has been criticized for using her own changing skin tone as a marketing technique. Pictures of Dencia taken in 2011 show her with much darker pigmentation compared to the Whitenicious campaign where she appears several shades lighter.

‘When you take that picture and you put a picture of Dencia darker, this is what you’re telling people – the product really works. And guess what? People really want to buy it. It’s what it is. I don’t really care,’ the singer admitted.

Still, she refutes the idea that she is glorifying lighter skin, claiming it is for removing dark spots only and that she came up with the name because it’s symbolic for ‘fresh beginnings’ and ‘purification’.

‘These girls are not trying to bleach their skin, they’re just trying to get rid of things that are making them feel uncomfortable’

‘These girls are not trying to bleach their skin,’ she says of her customers. ‘They’re just trying to get rid of these little things that is making them feel uncomfortable, you know? [sic]‘

In another attempt at justification, Dencia explains that the majority of her customers are African-Americans, not Africans, ‘because the White man doesn’t even like the light Africans. They like the Black Africans.’

‘Do I know what they want to do with it? No, I don’t care because it’s their money, it’s how they want to spend it.’

‘When you take a new picture and one of me darker, this is what you’re telling people – the product really works’

Finally, when Dencia is warned that skin-lightening cream has been proven to cause cancer, she counters: ‘But guess what? The air you breathe outside causes you cancer. Everything in the world causes cancer.’

When Dencia launched Whitenicious in January and saw it sell out within 24 hours, critics took to Twitter to voice their outrage that she would promote a phenomenon that has come to symbolize self-hatred among dark-skinned women.

One person posted a tweet directed at her, writing: ‘This #whitenicious cream of yours is an abomination and creating more insecurities among women all over the world.’

And another said: ‘When Martin Luther King, Jr. said, “I have a dream…” The dream was not to become white.’