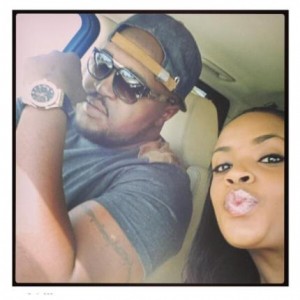 The internet has been filled with reports of the break-up of BBA winner — Dillish and her BF of over 5 years.

In a chat with Namibian Sun, Dillish’s ex boyfriend has confirmed the rumos that he and BBA The Chase winner Dillish have ended their relationship.

According to Steve, they split in December last year after a heated argument over some flirtatious text messages he sent to a Nigerian woman!

There were stories that Steve also impregnated another woman but he denied that, saying it wasn’t why they broke up.

Instead, Steve dared anyone to produce evidence that he had made another woman pregnant, and if they could, that he would pay the person N$100 000. If a woman came forward and proved she was pregnant with his child, she would get N$150 000.

About the Nigerian flame: Gaeseb first paused and then explained that he and Dillish  had argued in December last year, after he flirted with another woman, and he and Dillish had both “said things they regret”.

“While Dillish was on the show, there was a Nigerian woman who was helping to campaign for people in her country to vote for her. I was in contact with her because I helped with the campaigning.”

“We flirted via text messages and so on. I mean all guys flirt, it doesn’t mean you intend on acting on it. She then sent a snapshot of our conversations to a friend of Dillish, who eventually sent it to Dillish. We had an argument about that, which led to an argument about other things and we both said some things that we wish we didn’t. After that we decided to break-up and haven’t been together since December.”

Steve also came to his former girlfriend’s defence and said people who claimed that she was a gold digger, who then became rich and dumped him, were wrong about her. He said:

“It wasn’t about money. It’s just that we both agreed that we are better apart. Dillish isn’t just physically beautiful, she is also amazing and I respect her’.

“We both need our privacy and we love each other and probably always will so we need our privacy” Gaeseb said yesterday. He added that him and Dillish still remain in contact and are friends. He said contrary to rumours, he had not impregnated another woman.

Dillish and Flavour: Asked about rumours that Dillish is dating Nigerian singer Flavour N’abania, Gaeseb said he doubts that she is.

“I doubt Dillish is seeing Flavour, but if she is, then it won’t be to spite me. Dillish isn’t a spiteful woman. It’s not her kind of thing.”

Gaeseb also responded to rumors that some journalists are in possession of naked photographs of Dillish, which was allegedly on a laptop stolen from him. He said his laptop was never stolen.

“I’ve heard about the rumors that my laptop was stolen and that’s how someone got naked photos of Dillish, but those rumors are not true and I haven’t had any laptop stolen. It’s sad that others want to capitalize on this break-up,” he said. Gaeseb added that right now he just wishes the rumors will end. “The pregnancies and the cheating rumors are all ridiculous. I wish people will give us our privacy and let it go now.”