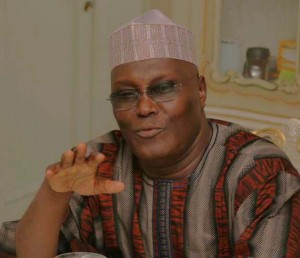 Reacting to the suspension in a statement issued by his media office in Abuja, the former Vice President maintained that the President had no power to remove or suspend the CBN Governor in such manner.

The former Vice President, who confessed that he has no details of the nature of Sanusi’s alleged “offences”, neither was he in the position to defend them, said “whatever might be the offence Sanusi committed, President Jonathan should have followed constitutional process to suspend or remove the CBN Governor instead of exceeding the boundary of his powers.”

“This is not about Sanusi as a person, or the person nominated to succeed him, Godwin Emefiele who is a thorough bred professional. It is about due process that should be upheld,” Atiku said.

Sanusi who was in Niger with other central bank governors of West Africa when the suspension was announced according to CBNC said ‘Well I don’t know what they are talking about when I come back I will see what those allegations are.

“I don’t think there is any issue that is been raised that has not been raised before, but you know we all know what this is about. This is about the consequences for the changes that I have made and this is something that is long overdue. I’m surprised it took them so long,” he explained.

“Basically, my biggest concern is for the system and I hope that the Nigerian economy will not be hurt by this. I also hope the integrity of the central bank will be protected … I’ve been fortunate to have had an opportunity to do some good work on the bank on stability. I would not want to see all of that unravelled and no individual is worth it,” he said.

“You can suspend an individual but you can’t suspend the truth. If this is all about the concerns around oil revenues in the oil sector, if this is going to bring back the 20 billion dollars then that is fine,” he added.

“Like I said, I have no regrets, I have no ill-feelings, with no sadness, I’m happy. I’m proud of what I have done,” Sanusi concluded.

He was later detained for questioning by the SSS.

According to Atiku, silence in the face of such abuse of power by the President of the country was capable of sending the wrong message and setting a dangerous precedent.

He recalled that, when he became a victim of such abuse of power in the past following his suspension as Vice President by former President Olusegun Obasanjo, he went to court to challenge the action and that the Federal High Court, the Court of Appeal and the Supreme Court ruled that a President cannot suspend a public officer he had no power to sack.

Atiku therefore advised the suspended the CBN Governor to go to court to challenge his suspension in the interest of constitutionalism and the rule of law.