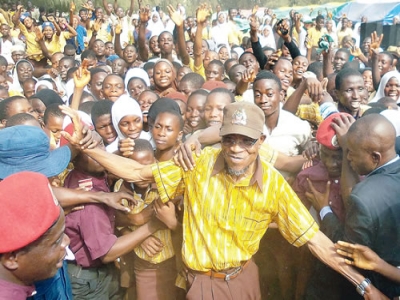 Governor Rauf Aregbesola of the State of Osun, on Monday stated that his government neither approved nor disapproved the use of hijab in any school.

The governor, who made this known in his remarks at the peace meeting between the Muslim Community and Christian Community at the Baptist High School in Iwo, which has been the epicenter of controversy over the reclassification and merger policy of the Aregbesola administration, and the distribution and assessment of the performance of Opon Imo, noted that it was the court’s position that the status quo ante be maintained until the case was determined.

Aregbesola stressed that his government being a product of rule of law, was guided in all its actions in strict compliance to the principles of the rule of law in the state.

According to the governor, “we are a product of the rule of law and this has guided all our actions. As we have said in the past, we have not approved the use of hijab in any school. Let me repeat this again for the hearing of mischief-makers who have been working tirelessly to bring religious war to our state.

“Those prompting chaos and conflagration in our state; those who have well established antecedent of violent behaviour; those sowing the seed of discord in our schools and community and inciting one religion against another, as we have said in the past, government did not at any time approve the use of hijab in any school, before the matter went to court. It is the court’s position that the status quo ante be maintained until the case is determined”.

He pointed out that government had set up a committee on discipline in public schools and when the report is released, government would enforce discipline in all its schools.
His words: “Yoruba people have a tradition of accommodation and inclusion; that is why our families are interwoven around all religions.

“Some people, goaded from hell, however, are working to break our bond of unity by beating the drum of religious war. They will fail and only they and their families will dance to that evil beat”.

Also speaking on the occasion, the deputy governor, Iyaafin Grace Titilayo-Tomori, who doubles as the Commissioner for Education, noted that peace is a necessary catalyst of learning not only in the schools but in the state as a whole.

She said: “Peace must be a permanent feature not only in our schools but every facets of the state. So, where there is pocket of disturbances, government will respond swiftly in restoring peace and order. This is what has been demonstrated at the peace meeting held at Baptist High school premises”.

Earlier, representatives of the three religions, Christianity, Islam and traditionalists, lamented that things that were ordinarily unconnected with learning and knowledge had now been introduced thereby creating a stumbling block to students’ progress in their studies.

They stated that none of them supported the unconventional ways students had been dressing to school.

Speaking on behalf of the students, Aremu Olukayode and Bashir Mutiyat thanked the government for the various educational projects such as Opon Imo, new schools and furniture and recruitment of new teachers.