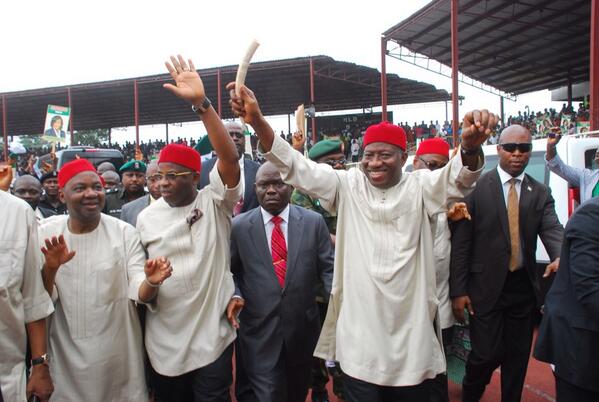 The Deputy Senate President, Sen. Ike Ekweremadu, said that the Peoples Democratic Party, PDP rally in Imo was to rekindle hope and recover the state for the party come 2015.

Ekweremadu stated this on Saturday in Owerri at a rally organised to welcome some Imo indigenes back to the PDP.

He thanked President Goodluck Jonathan for his visit saying it was an indication of his love for people of the South-East of the country.

The deputy senate president said the turnout of Imo people to the rally was also an indication that the state was already back as a PDP state.

Ekweremadu, who said that PDP had been revived to accommodate everyone, assured the president of the votes of people from the South East states.

He commended Imo people for their support to the president and the PDP adding “today, the president will leave here assured that in 2015 he has the votes of the entire South East people”.

Also, the Deputy Speaker, House of Representatives, Mr Emeka Ihedioha, said that the rally was a step to strengthen the party in the state and to reclaim the Imo Government House back to PDP.

He added that the over 1.3 million votes given to the president in 2011 were not in vain adding that the state was now in the mood to repeat the feat.

Ihedioha urged the party members to receive the returnees and work with them.

The Governor of Akwa Ibom and the Chairman, PDP Governors’ Forum, Mr Godswill Akpabio, thanked President Jonathan for coming in person to welcome the returnees and their supporters.

He attributed the massive turnout of the people to the transformation agenda of the president.

“You have come not only to receive the returnees but also their many supporters”, he said.

Akpabio said the rally was aimed at sensitising, restoring and re-awakening PDP in the state and urged the people to form a common front to produce the governor in 2015.

He said that PDP lost Imo state, including the present governor of the state, Chief Rochas Okorocha, to another party as a result of internal wrangling.

He assured that with the returnees and other members of the party they would prove that Imo was a PDP party in 2015.

Mu’azu appealed to PDP aspirants in any position to know that only credible persons would be presented as party flag bearers to ensure the party wins in 2015.

“I urge you to work in unity after the primaries. PDP is a large home for everyone and everyone can achieve his or her aim through the party.

“You need to work in collaboration with the returnees to ensure that our aim is realised”, he said. (NAN)