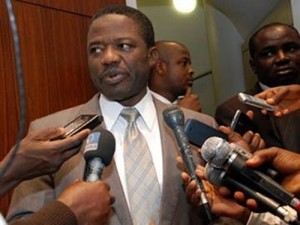 The immediate past Minister of Police Affairs, Retired Navy Capt. Caleb Olubolade, on Saturday declared his intention to run for Ekiti governorship election.

The News Agency of Nigeria (NAN) reports that Olubolade declared in Ado Ekiti at a reception in his honour by members of the Peoples’ Democratic Party (PDP) Ekiti chapter.

NAN also reports that Olubolade resigned his position as the Minister of Police Affairs to vie for the governorship position.

He said that he would not borrow money from the capital market to finance the state if elected.

He also said that his administration would run a programme that was in tandem with the transformation agenda of President Goodluck Jonathan to bring development to the state.

Commenting on the N25 billion bond sought by the incumbent, Gov. Kayode Fayemi from the capital market, Olubolade said that “borrowing of money by Fayemi is a proof of his failed government.

“I want to assure you that I will not borrow a dime to finance the state and all I am going to do as programmes will align with the transformation agenda of President Jonathan.

“I am determined to rescue Ekiti from the pangs of bad governance”.

He said the incumbent administration had failed Ekiti people as could see the signs in the level of poverty, unemployment and poor policy formulation in all facets.

He thanked Jonathan for giving him the opportunity to serve the nation, saying he would justify the confidence reposed in him if voted into office.

The Ekiti PDP Chairman, Mr MakanjuolaOgundipe, assured the people that the mismanaged funds by the incumbent administration would be recovered when the party eventually takes over leadership.

He noted that the present administration promised free education, free health services, employment, but that yet they were not free in Ekiti today.

Ogundipe urged the people to vote for PDP’s candidate in the forthcoming June 21, governorship election. (NAN)