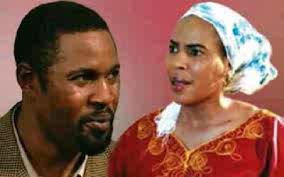 Famous Yoruba Actress — Fathia Balogun has revealed that she is still married to her estranged husband, Saheed Balogun, slamming rumors that they are presently in court.

Fathia stated that they are only separated and not divorced.

The Delta born Actress who played her first role as a Secretary in a Movie titled “Ta lo pa Chief”, disclosed this in a recent interview on Channels TV.

“I am still Fathia Balogun. I am still married to Saheed it’s just that we are separated. Well, we might consider coming back… what God has joined together let no man put asunder, but right now I’m not thinking about it, and I don’t want to talk about it right now,” she stated.

The actress further revealed that she would be going back to school to study English.

“I am going back to school to study English. I need it, especially now that I will be opening a film school. I am a strong struggling African woman, so I need it“

When asked what she does besides acting, the mother of two said.

“I’m into business, I sell assorted wines and beautiful hair, and I’m going to have my own hair label soon, Fathia hair”