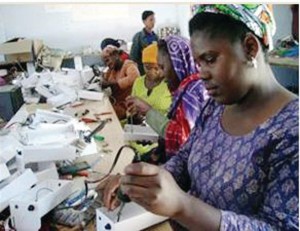 The federal government has shown its commitment to the empowerment of women and girls with the implementation of its two-year-old programme, the Girls and Women Initiative in Nigeria (G-WIN).

The programme aimed at opening access to life changing opportunities for girls and women in diverse spheres and walks of life, has commenced in Abia state with a workshop for rural women and girls which ended in Umuahia yesterday.

The training focused on community-led total sanitation (CLTS), leadership and conflict resolution, water scheme operation and maintenance, water kiosk management and entrepreneurship, endeavours. The project is to be implemented in five pilot states.

In her key note address while declaring the workshop open, Minister of Water Resources, Mrs. Sarah RengOchekpe said that the components of the training programme would enhance the capacity of women and girls to create employment and wealth, thereby alleviating poverty.

“The project is also to serve as a vehicle to effectively harness the potentials from this class of the society to sustainably support the transformation agenda of government,” she said.

Represented by the director of water quality control and sanitation, Mr. Samuel O. Umeh, explained that the project “is very dear” to President Goodluck Jonathan “in his determination to address the skewed distribution of the nation’s resources and opportunities” against women and girls.

According to her, Mr. President was not comfortable with the disadvantaged position of the female folk, hence, he approved the implementation of the G-WIN project “in realization of the potentials inherent in the average girls and woman in Nigeria to substantially contribute to the overall growth and development of the community. and country”.

The G-WING project was a product of the collaboration with development partners and eventually developed into an implementable programme in 2013 under the leadership of the Minster of finance/coordinating minister of the economy, Dr Ngozi Okonjo-Iweala.

To ensure effective implementation of the G-WIN project five ministries (Water Resources, Agriculture, Works, Communication and Health) were selected as pilot implementing agencies and were asked to integrate the G-WIN concept into the mandate of their respective ministries.

“Essentially the implementing agencies are to seek out innovative approaches to reach out to the poorest girls and women by enhancing the already existing opportunities and opening more to support and increase the number of girls and women gainfully employed in the sector,” the minister said.

Aside from Abia other pilot implementing states include Bauchi, Osun, and Plateau with two local governments selected in each of the states for the implementation of the G-WIN project.