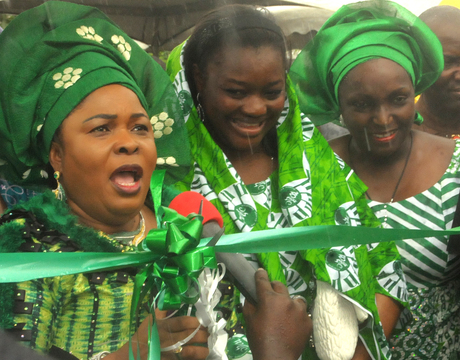 Wife of the president, Dame Patience Jonathan, yesterday urged lawmakers and stakeholders in the implementation of the Millennium Development Goals (MDGs) to avoid playing politics with the programme.

The First Lady said it was important to consider the interests of those the lawmakers represent and ensure that such interests were catered for.

She said the MDGs included participation of states and local governments, besides the interventions from the Federal Government.

The First Lady made this known on Tuesday at the launch of Village Health Workers Scheme at the State House, Abuja.

She was reacting to the demand of the Chairman of the House of Representatives Committee on MDGs, Hon.Alhassan Ado Garba, to include the most remote local governments in his home state of Sokoto among the next benefitting councils in the programme.

Mrs Jonathan said: “Before I end my speech, I need to specially thank the honourables in the National Assembly. You know there are things you play politics with and things you do not play with. We should think of our people – women and children – because they voted us to power to improve their lives.

“They voted us to improve our communities and foster development to our villages. So, I must say we should not play politics with it, because we need to understand that the MDGs are usually about collaboration among federal, state and local governments. There are roles each of the level of government will play”.