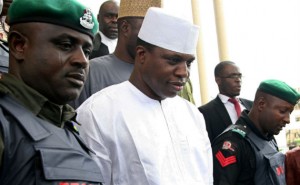 Former Speaker of the House of Representatives, Mr Dimeji Bankole has been discharged and acquitted by the Abuja Division of the Federal High Court, over allegation that he used fake companies and defrauded the federal government to the tune of N894 million while he was in office.

Justice Evoh Chukwu, while upholding a no-case-application that was filed before the court by the former Speaker, Friday, held that the Economic and Financial Crimes Commission, EFCC, failed to establish a prima-facie criminal case against the accused person.

Consequently, Justice Chukwu, quashed the entire 16-count charge against the ex-Speaker, saying he was satisfied that the accused person has no case to answer with respect to the charge.

“There is no justification for the continuation of this trial, the prosecution failed to disclose a prima-facie case to warrant the court to demand explanations from the accused person. There is no nexus connecting the accused with the alleged offence”, said Justice Chukwu. [Vanguard]