Home National News Odd News Former US Marine Left Everything Behind to Live in the Forest, Barefoot
Facebook
Twitter
WhatsApp 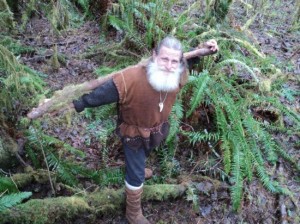 Mick Dodge has spent the past 25 years away from civilization, living off the land in a rainforest. The former marine gave up his 9-to-5 job as a heavy equipment mechanic at Fort Lewis to take up this alternative lifestyle. “That’s my real life passion,” he says.

Dodge is actually a native of the Hoh Rainforest, located on the Olympic Peninsula in western Washington State. His great-grandparents settled in the region; Dodge grew up there and in several other places around the world. Eventually, thanks to his father’s influence, he became an extreme fitness freak.

But the 62-year-old doesn’t miss the gym in the outdoors. He has created a unique concept called the Earth Gym – a sort of YMCA in the forest with natural equipment. Dodge uses cargo nets, straps, stones and ropes to create a fitness regimen of his own. Students come to learn from him as well, and he teaches them exercises developed on a connection with nature. His extreme techniques include running barefoot upstream in the Sol Duc River.

In fact, Dodge doesn’t use any footwear at all. Whether he’s walking, running or climbing, he does not prefer to use shoes or sandals. He has been living barefoot since 1991, a decision that he claims has cured him of plantar fasciitis, back pain and hammer toes. He said that it has also helped him interact more intuitively with the natural world.

Dodge’s bad feet were actually the trigger that lead to his extraordinary lifestyle in the forest. “My feet hurt. They hurt so bad that I could barely walk and I had always used my walk and run to handle the stress of modern living. The Hoh is home for me. So I went home to heal my feet.”

It turned out to be the best decision of his life. “The results came quickly. Not only were my feet healing, but my back pain, neck pain and most of all my heart pain disappeared, and in no time at all I was back into a dead run, stepping out of the sedentary, stressed, sedated and secured living of the modern world. I was dancing as the fire, running as the wind, strengthening as the stone and flowing as the water within, by the simple act of touching with my bare soles and allowing the Earth to teach.

But being barefoot hasn’t always worked out for the best – there have been times when Dodge injured himself. Like this one time he went running in the early winter and almost lost his toes to the snow. He said that the incident taught him a powerful lesson: “Don’t throw the baby out with the bath water.” Now, he sometimes allows himself to wear knee-high buffalo skin boots with elk horn buttons.

Dodge is very practical; he isn’t a complete naturalist and I suppose this helps him survive. In the wet climate, he prefers wearing plastic garments to protect himself from the rain. “The art of living out here is the art of staying dry,” he said. He also has the remarkable ability to eat pretty much anything.

“I am an omnivore, able to eat a wide variety of food, which also means that I learned how to become a scavenger and allowed the hunger in my belly to guide me into discovering all kinds of food. When a cougar kills an elk, the entire forest moves in to eat. So I do the same,” he said. “But there is one highly spiritual food that I try to maintain in my stashes and storage places and that is chocolate-chip cookies. My grandmothers got me hooked on them.”

Despite his bizarre lifestyle, Dodge is not an isolationist. He is very much in tune with a community of mountain dwellers. He even manages to find himself the occasional lady friend. “On my journey, I have formed so many wonderful connections with women, formed strong brother-and-sister relationships with them,” he said. “I may not be able to figure out what they are always talking about. But if their soles are touching the earth, I am more able to figure it out.”

Even though Dodge doesn’t miss modern civilization, he hasn’t shunned it all together. “There is no way to get away from it. So I developed a physical fitness practice in how to step in and out of it, stepping out of the walls, machines, electronics, social babble for a while, ground back into the natural flow of the land, and then go back in.”