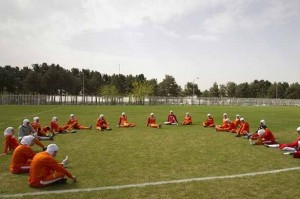 Four footballers from Iran’s national women’s team have been banned from playing – because they are in fact blokes.

The quartet are among a several top ‘female’ players in the Islamic Republic found to be men awaiting sex-change operations.

Yet despite the country’s ban on homosexuality and sex before marriage, the stars have been told they will be allowed back after surgery.

All female footballers are now being gender-tested before they can sign for a club.

Random checks are also being carried out at training grounds.

As a result, seven players have had their contracts cancelled.

Some of the banned players have sexual disorders where their genitals have not developed properly, or are a mixture of male and female organs.

Ahmad Hashemian, head of the Iranian football federation’s medical committee, told The Sun: “If these people can solve their problems through surgery and be in a position to receive the necessary medical qualifications, they will then be able to participate in women’s football.”