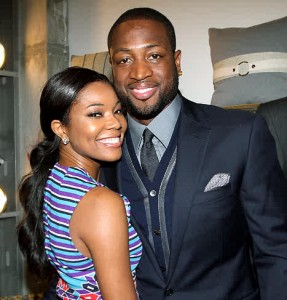 Beautiful and sexy Hollywood actress — Gabrielle Union revealed in a chat that she has insisted on a prenuptial agreement before marrying basketball star Dwyane Wade who was recently accused of physical abuse by his ex-wife.

The 41-year-old actress appeared on The Arsenio Hall Show on Monday and said her marriage to 32-year-old Wade would include a prenup – at her insistence.

Hall opened the marriage topic by commenting on the gigantic 8.5 carat cushion cut diamond ring that Wade gave her in December when he proposed.

Gabrielle’s first marriage to American football player Chris Howard ended in divorce and she said her marriage to Wade would be different, according to an article on Wednesday by People.

‘The biggest difference between this and the last marriage will be a prenup – at my insistence,’ she said to applause from the audience.

“When you have your own stuff, you don’t need to worry about anyone else’s stuff. So everyone should go into the relationship knowing, ‘I’m here for you and you’re here for me.’ And the reality is I’ve never seen Dwyane balance a checkbook, so I gotta protect my stuff. It’s the wave of the future.”