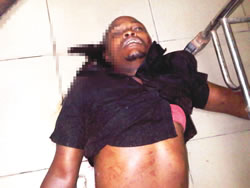 A gang of thugs have stabbed the vice chairman of a branch of the National Union of Road Transport Workers to death, Punch Metro Reports.

It was learnt that the victim, Seyi Olaleye, aka Seyi Rugged, was killed on Moore Street, off Apapa Road in the Ebute Meta area of Lagos State.

Our correspondent was told that Olaleye, who was in his 30s, was the vice chairman, NURTW, Deji Ayewa, Costain branch.

It was learnt that he was killed during a clash with a group of thugs led by one Waheed aka Skippo.

Report says Skippo and Seyi Rugged and their respective followers had been at loggerheads for some times.

It was learnt that the fresh crisis began after some of Skippo’s boys attacked Seyi Rugged’s boys during a carnival in the first week of January.

A member of the Neighbourhood Watch, who craved anonymity, said, “Seyi Rugged group controls Jones and Vaughan streets as well as Oto and Railway line.

“Skippo controls Brickfield, Olokodana, Ilogbo and Fagbaimu areas. On January 6, there was a carnival in Abule Nla and Skippo’s boys attacked and overpowered Seyi Rugged’s people and fled.

“In the same week, there was another attack on Seyi Rugged’s boys again and he felt it was time to retaliate.”

PUNCH Metro learnt that elders in the community called Seyi Rugged for a meeting two weeks ago and advised him to make peace with Skippo.

The deceased, who was married with two sons, was said to have agreed and promised not to foment any trouble.

The deceased was said to have constantly complained that he and his boys were being marginalised by authorities of the Mainland Local Government who outsourced jobs to Skippo’s faction.

A resident, who introduced herself simply as Iya Dada, said, “Skippo was part of the Local Government’s security team and his faction usually enjoyed benefits from the government.”

It was learnt that penultimate Friday, after a caucus meeting of the All Progressives Congress, a prominent member of the party gave out money to some of the thugs who had gathered to serenade them.

An eyewitness, Adebola Onafeko, said a fight soon broke out between Seyi Rugged’s faction and Skippo.

He said, “Around 6pm, Seyi Rugged led his boys to fight against Skippo and his boys. Seyi Rugged was hacked many times and his fingers were cut off.

“Skippo and his boys also sustained injuries. A few minutes later, Seyi Rugged, who was in a pool of blood, was rushed to the Federal Medical Centre, where he was pronounced dead.

“We reported the matter to policemen at the Iponri Police Division, and policemen came to the hospital.”

Our correspondent learnt that the police arrested many youths in the area.

Meanwhile, it was learnt that the deceased, a graduate of the Polytechnic, Ibadan, had been buried.

Residents urged the police to beef up security in the area in order to forestall any reprisal.

Police Public Relations Officer, Ngozi Braide, could not be reached for comment.