He Tied My Mouth And Defiled Me For An Hour, I’m Glad A Bus Hit Him – 12 Year Old Narrates (PHOTO)

On January 18, 2014, Adeleke, who is an apprentice meat seller at Tinubu Market in Iyana-Ipaja, Lagos, allegedly added his name to a long list of sexual predators walking the streets of Lagos. 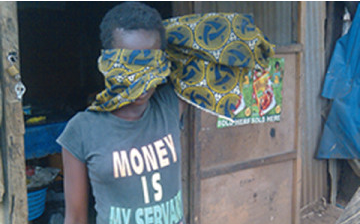 That day, which would change the life of 12-year-old Bisola (not real name) forever, was when Adeleke ambushed the young girl and raped her for one hour.

Adeleke was eventually arrested but in his attempt to escape from the police custody, he was hit by a moving vehicle when he ran across the road.

Adeleke’s boss supplies meat to Bisola’s mother, a food vendor. It was learnt that the suspect had on occasions delivered meat to the girl’s mother.

“I followed a friend to buy sugar in the market (she sells sugar to assist her family) and when I was coming, he (Adeleke) told me to follow him to their shop to collect meat for my mother. I followed him but I did not enter the shop. There was nobody else around. It was after 7pm. He told me to enter but I said he should bring out the meat. He then said I should take the meat from the freezer. As I attempted to open the freezer, he grabbed me and tied a cloth over my face and mouth. “He held me down and pulled off my pants. He did not leave me until around 8.30pm. I could not shout. The place was dark.”

The girl paused, her eyes moist with tears as she narrated the story. “I am happy a vehicle hit him,” she said.

Bisola was raped for an hour by her estimation.  She said she remembered the time Adeleke finally released her because she had to look at the clock on the wall of the shop because she knew her mother would have been looking for her. The young girl rushed out of her captor’s embrace bleeding and bruised.  But shame and confusion would not allow her to go straight to her mother.

Her mother narrated that on that fateful day, she had expected Bisola to return but when she did not, she retired to bed, thinking that her daughter must have stayed late in her friend’s house.

“I heard her enter the house later. But around 3am, she started to sob loudly,” she said.

Both mother and daughter live in a small decrepit wooden shack around Gowon Estate.

When the woman went to check on her daughter, she noticed her underwear was soaked in blood. which had started running down her legs. She was about to scream but quickly changed her mind because she was afraid of alerting her husband, Bisola’s step-father, to what had happened.

“But by morning, I could not hide it anymore. She told me the person responsible for it and around 5am, we went to report at the Gowon Estate Police Division, Ipaja. The man was later arrested,” the woman said.

Bisola was taken to the hospital and a doctor who examined her immediately recommended surgery to repair her damaged private part. After the surgery, she was on admission for two days.

The doctor’s report obtained by our correspondent indicated that she was brought to the hospital “bleeding profusely from second degree laceration in her private part and broken hymen.”

But a day after the young man was arrested, he was released by the police.

Director of the Esther Child Rights Foundation, Mrs. Esther Ogwu, said she intervened in the matter when the victim’s step brother reported the incident to her.

She told Saturday PUNCH, “It was really absurd that he would be released that way. I could not believe that in the face of the increasing child abuse and molestation being reported every day, the police could still release a suspect without promptly charging him to court.

“The girl was raped on a Saturday; by Monday, the man was arrested. But by Wednesday, the family said they went to the police station and were informed by the investigating police officer that he had been released.

“I informed the Lagos Public Advice Centre of the development and officials of the centre contacted the police division. The IPO was forced to rearrest the boy. I just wonder if the police have heard of the Child Rights Act.”

One of the reasons for enacting the Child Rights Act in 2003 is to stem the tide of child abuse and molestation in Nigeria and reinforce the legal provision against it.

Adeleke was rearrested and locked up preparatory to his transfer to the State Criminal Investigation Department, Yaba.

But the suspect had a different idea. He decided to escape. As soon as the IPO turned her back, Adeleke ran out of the station and was about to cross the road when he was hit by a commercial bus.

Of course, the bus did not stop, as he would later tell our correspondent in the hospital.

An OP Mesa military team, who saw him injured on the road took him to the hospital.

Asked why he decided to escape, he said, “I was just afraid. I did not know that it would become such a serious matter.”

But when he was asked why he raped the girl when he could have paid to sleep with a commercial sex worker, he said he did not rape her.

“I did not rape her sir. She is my girlfriend. We have been dating since early last year. She always called me ‘okobo’ (a Yoruba word for eunuch),” he said.

Bisola’s mother would later refute this claim as a concocted story because she only moved to Ipaja with her daughter in August 2013.

Adeleke disputed that Bisola is just 12 years old which makes her a minor.

He said Bisola had told him that she was 18 years old. But when our correspondent met the girl, there was nothing to indicate that a man could be fooled into thinking she could even be up to 15 years old.

The suspect said, “That day, I went to buy fuel and she followed me. When I returned home, I told her to leave but she would not. She was tickling me and calling me okobo.

“I told her to leave and I saw her off but she came back and started tickling me again. I then decided to do it. But when I pulled off her underwear and realised she was still a virgin, I decided to leave her but she started taunting me again. Then I did it. I did not know that she would bleed like that and that it would become a police matter.”

When asked why he blindfolded and muffled the girl’s mouth with a piece of cloth, Adeleke denied doing that.

The young man, who said he was an indigene of Abeokuta, only finished primary school.

But there is fear that Adeleke might escape if discharged as the IPO had only visited the suspect once.

Adeleke said his mother was late but added that his brother and boss were looking for money to offset his medical bills.

Meanwhile, Bisola’s mother and step-father have changed course on the case.

When our correspondent visited them on Sunday, the step-father, who did not hide his anger, said he had no money to prosecute the suspect.

“They should release him. I don’t have any money to move around to prosecute anybody. We have spent enough money already. Nobody should come and disturb me again,” he said.

Bisola’s step-father, who did not seem to be literate, was told that prosecuting Adeleke was not his job but that of the police and that he did not have to spend money.

“What about moving here and there when the police call us or when we need to go to court? The man himself is poor. It is not worth it,” he said.

Bisola’s mother, who seemed helpless in the face of her husband’s attitude, also concurred.

“We spent money on her treatment; we have even incurred debt. We will leave the matter to God,” she said.

Share
Facebook
Twitter
WhatsApp
Previous articleObasanjo Is A Spoiler And Can’t Keep To His Words – Kashamu Attacks OBJ Over Comments On Jonathan
Next articleCONGRATULATIONS! See What Famous Nigerian Singer Is Pregnant With First Child
- Advertisement -