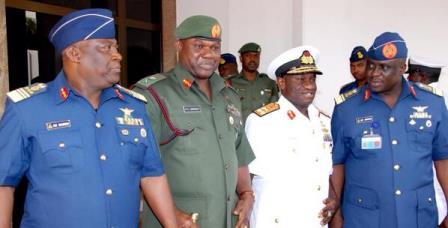 President Goodluck Jonathan’s appointment of new Service Chiefs has been confirmed by the House of Representatives on Tuesday, despite the directive issued by All Progressives Congress to its lawmakers to block all Executive Bills.

Lawmakers considered the report of the Joint Committee on Defence, Army, Navy/Air force, chaired by Mr. Bashir Adamu, which earlier screened the Service Chiefs before adopting the report.

The “one-item” recommendation of the report urged the House to confirm the officers because of the present security challenges the country was facing.

Adamu informed his colleagues during siting of the House yesterday that after the committee interacted with the Service Chiefs, members were satisfied with their responses.

Adamu added, “In view of the fact that our sister chamber of the senate has confirmed their appointment, there is need for the House to also approve the appointment of the new service chiefs”.

When put to a voice vote, the lawmakers unanimously approved the recommendation of the committee.