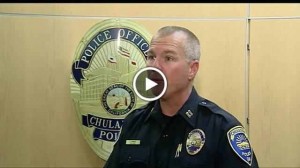 Authorities say it was a “selfie” that led detectives to a suspect in the burglary of a Southern California church.

U-T San Diego reports detectives found a phone at the crime scene in Chula Vista, where a laptop, cash, watches and other items were stolen.

On the phone was a photo the suspect had apparently snapped of himself.

Residents recognized the man in the photo and on Tuesday police arrested 26-year-old Adam Howe.

A search of his belongings uncovered property believed to be stolen from the Hilltop Tabernacle Church and an RV parked nearby.

Further investigation led to the arrest of two other people who were also found with stolen property.