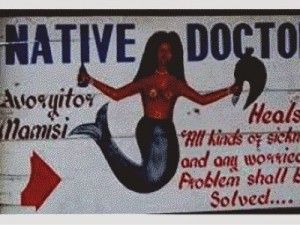 A Lagos based herbalist blew the whistle on one of his female clients after a huge fall out which led his arrest. The herbalist was said to have exposed his client who was using a love charm he had prepared for her to use on her latest conquest – a rich billionaire, identified as Chief Greg. According to the herbalist, Chief Greg (surname withheld) abandoned his wife, children and home in Abuja travelling across the world with his newly found mistress, Augustina Chiegeonu, claiming he had found true love but discovered after he had lost a huge chunk of his wealth to a strange lover that he had indeed been under a spell. Reports from The Sun Newspaper  says that herbalist set Chief Greg free from the spell in a bid to punish Chiegeonu.

“I met her in one of my business trips in Lagos and months later she was all that matters to me. Could you believe that I left home for the past eight months travelling from one country to another with her? I spent millions of naira funding her various boutiques in Lagos and Abuja. I bought houses for her in Abuja and was ready to give her all, till this man who God will continue to bless rescued me”, he told Saturday Sun after he recovered his senses. Chief Greg was let loose only after a quarrel burst the deal between Augustina and the herbalist, Segun Adesoye who prepared the love charm used on the billionaire businessman.