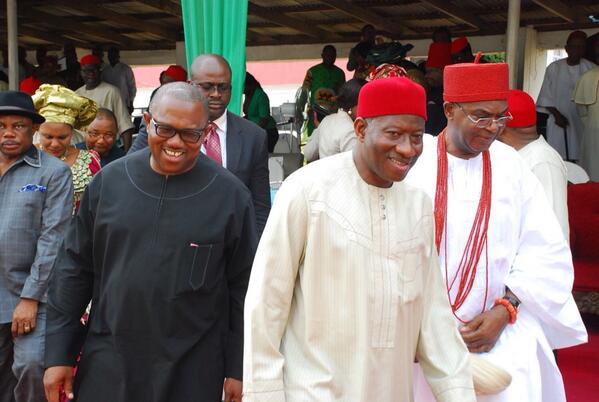 President Goodluck Jonathan has assured Nigerians that he would perform the ground breaking of the Second Niger Bridge “before Gov. Peter Obi leaves office on March 17”.

This, he said, is to honour Obi for the passion he has shown for the execution of the project.

The president made this known when he paid a visit to Igwe Alfred Achebe, the Obi of Onitsha, in his palace yesterday.

Information Nigeria recalls that President Jonathan made construction of the Second Niger Bridge part of his 2011 campaign promises to the people of the South-East and South-South zones.

The project was conceived in order to decongest and relieve the existing bridge across the River Niger in Onitsha of the burden of vehicular movement, which gets worse during festive periods.

“By the time I am doing the ground breaking I want pile drivers and other equipment to be on ground.

“Immediately the ground breaking is done, work will start up and our people here will start seeing reality on ground.

“The First Niger Bridge was built by Azikiwe (Nnamdi) and the Second Niger Bridge will be done by another Azikiwe (Goodluck Jonathan) before he leaves office”, Jonathan assured.

The president thanked Anambra people for their over-whelming support assuring that the Peoples Democratic Party, PDP, and All Progressive Grand Alliance, APGA would “continue to work together for the progress of our people”.

Jonathan also assured that Gov. Obi would continue to work with him; having been a member of his Economic Management Team.

Earlier, the Obi of Onitsha reminded the President of the promise he made concerning the Second Niger Bridge.

“You promised this during your campaign here and also assured that the bridge will be completed within your tenure in office.

“We beg you to start it now. And it will be a great legacy for you”, Igwe Achebe added.

He thanked Jonathan for the on-going Zik’s mausoleum project in Onitsha adding that the present administration had finally turned the age-long dream into reality.

“It will go down in history that it was your administration that had the determination and zeal to finally give our beloved, Dr. Nnamdi Azikiwe, Owelle-Osowa Onitsha, first President of Nigeria, and Zik of Africa, a befitting resting place”, he said.