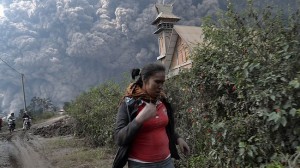 Fourteen people, including four schoolchildren, were killed after they were engulfed in scorching ash clouds spat out by Indonesia’s Mount Sinabung in its biggest eruption in recent days, officials said.

Dark, searing clouds rolling down the mountain left apocalyptic scenes of ash-covered bodies scattered by a roadside in Sukameriah village, just 2.7 kilometres from the volcano’s crater, an AFP witness who helped with the evacuation said.

Officials fear there could be more fatalities from Saturday’s eruptions, but due to the high potential of lethal heat clouds spewing from the mountain, a search and rescue mission has been grounded, officials said.

“We suspect there are more victims but we cannot recover them because the victims are in the path of the hot (ash) clouds,” said Sutopo Purwo Nugroho, the spokesman for the National Disaster Management Agency.

All 14 bodies have been identified. Four of them were high school students on a sightseeing trip to the volcano on the western island of Sumatra, he added.

“The bodies were in a state where, even though their skin did not peel, their faces were swollen and the tongues were sticking out,” an AFP reporter on the ground said.

Three other people – a father and his son who wanted to pay respects at the graves of their relatives, and a man who came to the village to check his long-abandoned house – were also trapped and injured by the deadly clouds, Karo district official Johnson Tarigan told AFP.

He said the three were in the intensive care unit of a local hospital.
Thirty thousand people have been evacuated from the area since the volcano started erupting in September.

But some residents had returned home on Friday following advice from the Center for Volcanology and Geological Hazard Mitigation that houses outside the five-kilometre radius from the mountain were safe.

The volcano erupted again on Saturday morning, sending hot rocks and ash up 2000 metres into the air, blanketing the surrounding countryside with grey dust, said volcanologist Kristianto, who like many Indonesians goes by one name.

Sukameriah village is located in the red zone, where human activities are strictly banned, but locals often trespassed the restricted area to check on their houses and belongings as well as their crops, officials said.

Nugroho said the evacuation will resume on Sunday.

Mount Sinabung is one of 129 active volcanoes in Indonesia that straddle major tectonic fault lines, known as the Pacific Ring of Fire.

It had been quiet for around 400 years until it rumbled back to life in 2010, and again in September last year.