It’s Unfortunate Some Nigerians Do Not See Any Good In The Jonathan Administration, Says Anenih 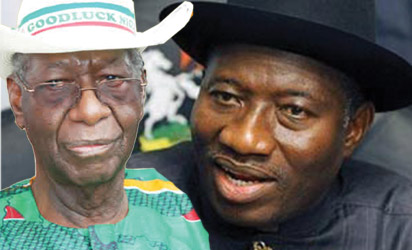 Peoples Democratic Party, PDP Board of Trustees Chairman, Chief Tony Anenih, has accused some Nigerians of not seeing anything good in the administration of President Goodluck Jonathan.

The former Minister of Works, however, pleaded for the support of southern states to Jonathan in the task of governing the nation.

Anenih made the plea in an address he delivered on Monday at the Southern Leaders Summit, which held in Calabar, Cross River State.

According to the PDP stalwart, the president needed the support of the southern states to face the challenges posed by Boko Haram, the global economic recession and unrest, and to keep the country united.

He said, “The unity of this country is not negotiable. We must acknowledge the uncommon leadership the President has exhibited in the face of these challenges.

“Unfortunately, some Nigerians do not see any good in the present administration. This perception must stop”.

Anenih also commended organizers of the summit, which was convened to articulate southern Nigeria’s positions at the forthcoming national conference.

“I commend President Goodluck Jonathan for his sagacity in giving Nigerians this golden platform to examine areas of concern about the Nigerian federation and find common solutions to those problems that have constituted a hindrance to our evolutionary journey to nationhood.

“I am convinced that the National Conference will strengthen the bonds of unity, the fabric of our federalism and the pillars of our nationhood.  The unity of this great nation is not negotiable”.

Anenih noted that it was heart-warming to see that different groups – nationalities, civil society organisations, faith-based organisations and academic institutions – were formulating their positions and preparing well thought-out proposals for the conference.

“This Southern Leaders Summit is, surely, one of the pre-conference fora, which hopefully, will identify areas of common interest to the states of the South”, he added.

Anenih also lamented the inability of the states of the South to speak with one voice, saying the summit would provide a platform to identify common interests.

He said, “There is no doubt that there are many concerns, which they share and need to identify at a platform such as this.

“Our northern counterparts have been known to work together as a united front. We, in the South, must also forge unity and cooperation among ourselves”.

He noted that the participants at the summit were men and women, who he said, had distinguished themselves in their various callings and in the services of this country.

Anenih expressed optimism that the ideas and proposals, which would emanate from the deliberations, would not only be profound but also capable of lifting the country and helping it towards attaining loftier heights.

Oshiomhole Is Not A Character Anybody Can Associate With: Wike

Rivers state governor, Nyesom Wike has described the national chairman of the ruling All Progressive Congress, Adams Oshiomhole, as one with a character that...
Read more

The Peoples Democratic Party (PDP) has reacted to accusation by the presidency that it has mobilised Nigerians to protest against the Buhari Presidency and...
Read more
- Advertisement -