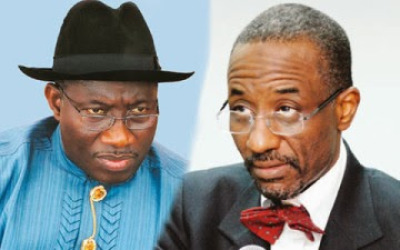 President Goodluck Jonathan has said that he has ‘absolute’ powers to suspend the Governor of the Central Bank of Nigeria, Malam Sanusi Lamido Sanusi from office until investigation into allegations of financial recklessness leveled against him are concluded.

Responding to questions during the Presidential Media Chat on Monday anchored by AIT’s Imoni Amarere and panel of journalists including Grace Ekpo, Goodluck Nnaji of Base FM, Oraifite in Anambra State, and Bolaji Tunji of New Telegraph, Jonathan said ” I will tell you yes. The President has absolute powers to suspend the CBN Governor”.

Jonathan stressed that “CBN as the number one bank is not even well defined in the Nigerian Constitution, but the CBN law makes provision that to appoint the governor and deputy governors of CBN and executive directors, president appoints and send to the Senate. But the President has oversight over the CBN, so if anybody tells you that the CBN is a different country, it is not true because for the CBN to change the Colour of the Naira, the President must approve”.

In reaction to speculations that the Federal Government was plotting to arraign the suspended CBN governor, the president dismissed such, saying nothing incriminating had been found on the apex bank or Sanusi.

According to him, “If he has a case to answer, it will depend on the nature of the case. In the public service there are some cases, which are not criminal in nature, such as an act of negligence, or that he skipped a process that he is supposed to follow, this might not lead to prosecution, he might only be sanctioned, indictment or so.

“Prosecution will only come in if a fraud is established. If a fraud is not established, it is just that somebody failed to follow due process or some other issues that are not clearly fraudulent. Nigerians should wait”, he pleaded.