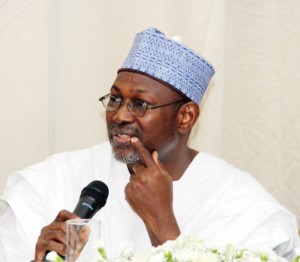 Jega made the call yesterday in Abuja when he received a delegation of the European Union led by its Ambassador to Nigeria Mr. Michel Arrion.

Speaking further, the INEC chairman stated that the commission was ready to increase its interaction with the media in order to enhance exchange of information, develop competence and professionalism, adding that EU’s support would be welcome in this regard.

The INEC boss commended the European Union (EU)’s previous election observation missions and declared that the commission was ready to receive a pre-election midterm review report.

He said previous election observation missions have been very beneficial to the commission, adding that INEC had studied their reports and did its best to implement many of the very good recommendation contained in them.

Jega appreciated the EU’s contribution to the joint donor basket fund, saying it had gone a long way to support democracy, governance and developmental project in general.

He also called on the EU to support those processes which INEC had found very beneficial, especially in the area of voter education, which the commission sees as one of the areas where the bloc’s collaboration and cooperation arneeded.