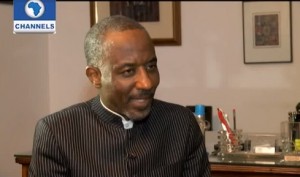 Suspended Central Bank Governor, Sanusi Lamido Sanusi on Sunday described President Goodluck Jonathan as a simple man who tries his best to do the right things at all times, but has been undermined by incompetent and fraudulent aides.

“When you sit with President Jonathan himself he appears a nice simple person who is trying his best to do his best,” Sanusi told AFP.

Sanusi was suspended on Thursday over alleged financial misconduct, after accusing the Nigerian National Petroleum Company (NNPC) of misappropriating $20 billion, allegations that earned him powerful enemies across the government.

Sanusi learned of his removal from office while in Niger on Thursday and immediately returned to Lagos, where agents from the Directorate of State Services (DSS) seized his passport.

On Friday, he secured a temporary protective order from the Federal High Court in Lagos barring Nigerian intelligence agents from the DSS or police from arresting him.

“I thought taking away my passport was the beginning of infringement on my fundamental human rights,” Sanusi told AFP, explaining why he had already sought court protection.

While no charges have been filed against him, Sanusi said he was prepared for whatever attacks may come.

“That we are here today means that I have taken the decision that I will face the consequences of whatever I do,” he said.

He said his “fierce independence” had been an annoyance to the government since 2009, culminating with his sustained, public attack on the NNPC, widely seen as the epicentre of corruption in Africa’s top oil producer.

“If I am sacrificed in whatever way, my freedom or my life…if it does lead to better accountability it will be well worth it,” he said.