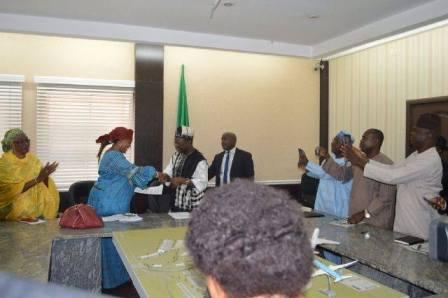 Former Minister of Aviation, Princess Stella Oduah, on Tuesday finally handed over to the supervisory minister, Dr. Samuel Ortom, after series of postponements of the ceremony.

Journalists were however barred from covering the event.

Sources at the Federal Ministry of Aviation said the former minister, who was dropped from the federal cabinet last week, turned up at the ministry Tuesday morning after making officials to shift the programme about four times.

Meanwhile, a statement from the former minister’s Special Assistant on Media, Mr. Joe Obi, said Ms Oduah thanked President Goodluck Jonathan, staff and stakeholders in the aviation industry for the opportunity given to her to serve the country.

She was quoted as saying, “During my tenure, we gave our best to institute reforms in line with Mr. President’s transformation agenda. We produced the aviation sector master plan and implementation road map.

“Using the plan, we were able to reconstruct and remodel all 22 federally-owned airports across the country. We also commenced the construction of five new international terminals in Lagos, Abuja, Port Harcourt, Enugu and Kano.

“We also introduced the perishable cargo and Aerotropolis concepts to drive the growth and development of not only the aviation sector, but also the Nigerian economy”.

Oduah, who battled to save her job after she was enmeshed in a series of scandals ranging from the controversial purchase of two bulletproof cars at the cost of N255 million and education qualification padding, was last Wednesday sacked by President Jonathan alongside three other ministers from the Federal Executive Council.