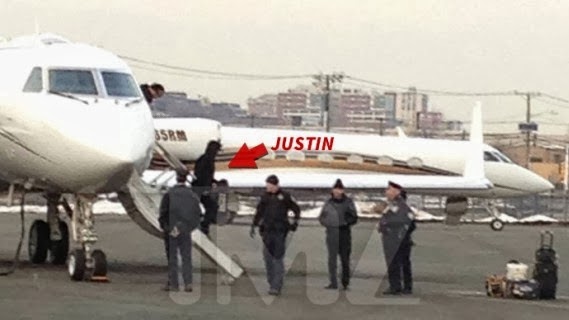 Canadian singer Justin Bieber’s days of breezing in and out of the U.S. are over after he was added on US Homeland Security watch list for his two ongoing criminal cases. This means he will be searched indefinitely by U.S Customs every time he enters the states, TMZ reports.

When Justin flew into a New Jersey airport from Canada last Friday … U.S. Customs searched his plane and then grilled him for hours, before letting him leave. Law enforcement sources tell TMZ … Custom’s flagged Bieber because he’s on a Homeland Security watch list.
We’re told Bieber is subject to the exact same treatment every time he leaves and then re-enters the U.S. — a thorough search and then exhaustive questioning.
It’s very hard to get off the watch list once you’re on it. You can appeal to Homeland Security but the agency has broad discretion. What’s more … if Bieber is found guilty or pleads no contest to any criminal charge, it will be extremely difficult for him to go under the radar again.

As for whether that will cramp his style … Bieber sources say he just doesn’t care. As one person put it, “He’s gonna do what he wants to do.”

New story on Justin Bieber from TMZ below…

Justin Bieber: The Idiot Knew He’d Get Searched And Still Smoked up the Jet

Justin Bieber is not only out of control … he’s hard-core stupid. He knew last week — before he took off for New Jersey — his plane would get searched by U.S. Customs yet he and his friends still hotboxed on the private jet.
TMZ has confirmed …. the pilot radioed in the air Justin and his gang were smoking weed on the plane and the flight attendant couldn’t get them to stop. The pilot complained the smoke in the cabin was thick. NBC News says the pilot actually had to don a gas mask because it was so bad.
Now here’s what’s incredible … TMZ has previously reported Justin is on a Homeland Security watch list because of 2 pending criminal cases.
Multiple sources connected with Bieber tell TMZ … Justin’s people called federal officials before the plane took off and they were informed Justin was on the list. Justin’s people told him before he got on the jet that he would be searched in New Jersey and interrogated, yet Bieber STILL smoked up the aircraft.
We’re also told Bieber and his buds were abusive to the flight attendant because she ordered them to stop smoking … in vain.
And to add icing to the cake … Bieber’s father was on the plane.
By the time the plane landed the weed was gone, but drug-sniffing dogs detected trace amounts.
One person who was on the plane 3 hours after it landed says it continued to reek of marijuaná.