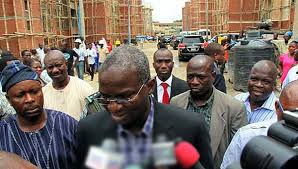 The Lagos State Government said it has completed 1,104 homes for the residents of the state in a bid to address the housing deficit in the state.

Governor Babatunde Raji Fashola, who disclosed this in Lagos during the launch of the Lagos Homs Ownership Scheme, said another 3,156 units are at various stages of construction, adding that his government intends to ensure that a large number of ordinary middle class and working class people procure homes in Lagos.

“For many years, our people have had to acquire houses; often times being required to pay cash once and for all; as if they were buying a shirt or a pair of shoes in a shop.” This approach in part, he said: “explains why a large number of ordinary middle class and working people cannot afford to acquire homes on the basis of the their legitimate income derived from hard work that rewards the dignity of their labour.

“In Lagos State, we have taken the view that a home is not something you buy in one day but over time, in a way that your ability to acquire it is tied to your income and continued prosperity.

“Lagos Homs is the acronym we have created from the Lagos Home Ownership Mortgage Scheme. It is a process by which Lagosians will be given a fair and transparent opportunity to pay for their homes over a period of not less than 10 years under a mortgage scheme.

“Today as we flag off this scheme there are 1,104 completed homes while another 3,156 units are at various stages of construction, and we intend to start more. We are starting 132 units in Ibeshe Ikorodu, 420 units in Ajara Badagry, units in Sangotedo Phase II, 216 units in Obele, 36 units in Akerele Phase II, 48 units in Oyingbo, 1254 units in Ilubirin and 1080 units in Ijora Badia,” the governor added.

According to Fashola, the easiest thing would have been to simply sell all the houses at once, collect the cash and wait for the next batch and do the same; “but this is not our way.”

The governor disclosed that the projects have been fully funded from the taxes paid by Lagosians monthly.