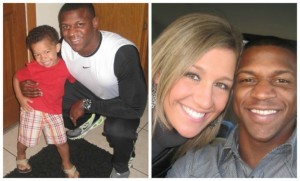 The family of a black father who went missing back in November only to be found weeks later with his throat slit and an ear missing say they want more answers. Police ruled the man’s death as an “accidental drug overdose,” but given the condition that his body was found in, the family rightfully suspects foul play.

The FBI has launched an investigation into the death of a physiotherapist who vanished and was found dead in a desert three weeks later missing an ear, teeth and tongue.

Alfred Wright, 28, was last seen at a petrol station near his home in Texas on November 7 as he drove to visit a patient.
His disappearance sparked a large-scale manhunt, but police closed the case after two weeks.

Days later, the father-of-two’s family found him half-n**ed and mutilated in the East Texas outback where police claimed to have looked.

Now, after two pathologists gave conflicting reports – one found the death to be an accident; another ruled Mr Wright suffered ‘severe trauma’ – the federal bureau has taken over the case, according to CNN.

The family has also issued an appeal for any information about what they believe is a ‘suspicious murder’ that was motivated by race.

They said married Mr Wright called his parents asking for a lift from CL&M Grocery in Jasper, Texas, because he had problems with his truck.  By the time they arrived at 6pm, he had vanished.

His watch and ID were found on a ranch the next day, which police searched and found nothing.

The sheriff is said to have ruled there was ‘no foul play’ and attributed the death to drugs.

Eventually, he was found wearing boxer shorts, tennis shoes and just one sock, with his phone tucked inside.
He was missing an ear, two front teeth, and his throat appeared to be cut.

Did these police officers really think they’d get away with ruling THIS out as a drug overdose? SMH. We’ll def keep you posted on this story as more updates are revealed.