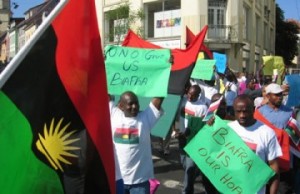 The Movement for the Actualization of Sovereign State of Biafra, MASSOB yesterday declared war against erring members who use the name of the organization to extort money from traders and unleash mayhem in the commercial city of Onitsha.

The chairman of Peace Committee and National Director of Information, Uchenna Madu who spoke to newsmen in Onitsha yesterday said the committee has declared “Operation Sweep” in the commercial city of Onitsha and its environs to rid the city of miscreants who operate under the guise of MASSOB to harass traders and extort money from them.

Madu also disclosed that the group has also suspended the Regional Administrator in charge of Anyamelum, Chief Arinze Igbani for his alleged involvement in the crisis between members of MASSOB and traders at Mgbuka market.

“From Monday, everybody should stay off the road, as MASSOB will officially launch its Operation Sweep” aimed at flushing out the bad eggs in MASSOB who use the name of the organization to rob people in the name of struggle. Our committee will begin a reconciliation visit to all the market leaders in the commercial city to know actually the cause of the recent clash between traders and our men and we have vowed to deal with any of our men that is found wanting.

“The five man committee led by my humble self, a Catholic Priest and other notable Igbo sons will also seek audience with other relevant authorities in the city to know the extent of damage to our economy by these miscreants who hid under the guise of MASSOB to perpetuate evil against Ndigbo”

The MASSOB image maker also urged the traders to open their doors wide to receive the delegation which will begin their visit in Ogbaru main market before spreading to other parts of the markets within the commercial city of Onitsha. [Vanguard]