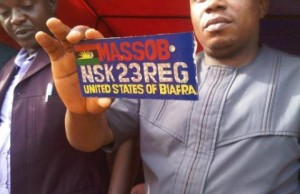 The Movement for the Actualisation of Sovereign State of Biafra (MASSOB) over the weekend formally unveiled its number plates for motorcyclists in Nsukka, Enugu State, with a plea to Ndigbos to see their new Biafra number plates as their identity.

MASSOB leader, Chief Ralph Uwazuruike, represented on the occasion by Chief Larry Odimma, Aba regional administrator of MASSOB, implored members not to be afraid of purchasing their number plates, arguing that they would not have broken any law by so doing.

“I am here on the mandate of our leader, Chief Uwazuruike, to launch these number plates aimed at identifying Biafrans and forestalling criminal activities among people who hide under our name to perpetrate evil”, he said.

According to Odimma, the number plate would be made available to persons of impeccable character only.

“The national leadership of MASSOB applauded the freedom being enjoyed in the state, unlike in places like Aba, Ontisha and Umuahia where members were constantly being harassed by security agents”, he said.

He sued for peace and harmony in the conduct of their activities in the state, adding that “we urge you to continue in our vision of non-violence as we march towards the take-off of Biafra government”.

In his address, the Regional Administrator of MASSOB in Nsukka, Mr. Kenneth Okwudili said the region expects everyone who shares in the dream of MASSOB to comply and get their own plate number which Information Nigeria gathered is to be sold for N1, 500 each.

“We expect every true and honest Igbo man with motorcycle to come forward and buy the plate number; this is our identity as Biafrans and we have to embrace it”, he stated.

He further noted that since the creation of Nsukka into a region in 2010, they had managed and sustained the struggle of MASSOB, adding that the launching of the plate number was part of their contribution to the sustenance and struggle for the actualization of the sovereign state of Biafra.

“MASSOB members will continue to partner and support the ideas of the Joshua of our time, Chief Dr. Ralph Uwazuruike in his course of maintaining non-violence in actualizing Biafra”, he assured.