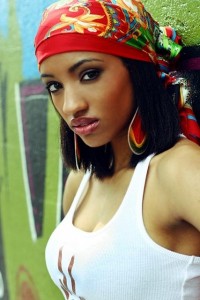 Don Jazzy has unveiled a new artiste who will join Dr. SID, Tiwa Savage and D’Prince to fly the Mavin Records flag.

The Nigerian-Sierra Leonean beauty Di’Ja (Real name: Hadiza Blell) is an upcoming singer formerly based in Canada. Her mother is from Northern Nigeria while her father is from Sierra Leone.

In 2009, she released her first single ‘Rock steady’ which was nominated for the Best Urban/R&B Single at the 2009 Canadian Radio Music Awards.

Di’Ja’s music can be described as Pop & Reggae-infused R&B. She also has a double degree major in Biology and Psychology.

She joins the likes of Dr SID, D’Prince and Tiwa Savage at Jazzy’s label. Inside sources in the Mavin camp tell us that the beloved music producer will be unveiling two more acts soon.