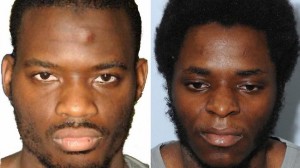 Adebolajo began yelling “that’s a lie” and “Allah akbar” as Justice Sweeney detailed how they had betrayed their religion.

The British-born Muslim extremists also warned Britain and America “will never be safe” as they were violently wrestled to the ground by nine security men in the central London court.

Adebolajo, 29, was given a life sentence and Adebowale, 22, life with a minimum of 45 years, the sentencing made in their absence after they were dragged from the court to cells below where they could be heard yelling and banging on the walls.

The men ran Fusilier Rigby down in a car as he crossed a street near Woolwich barracks in south East London in May last year before they stood over him and hacked him to death to the point of decapitation.