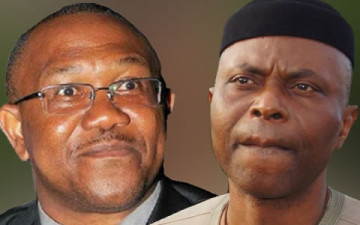 Amid speculation that they have perfected plans to dump the political parties that brought them to office, Governors Olusegun Mimiko and Peter Obi of Ondo and Anambra States respectively, have insisted that there is no truth in the rumor.

Mimiko was elected as governor on the platform of Labor Party (LP) while Obi was elected on the platform of All Progressives Grand Alliance, APGA. Both men are also on their second term of eight years with the Anambra governor prepared to hand over the reins of leadership to his successor next month. Another political trait they share is the fact that they are the only governors in their parties.

Speculation of their impending defection to the ruling Peoples Democratic Party, PDP, heightened last week Tuesday when they both attended a meeting between PDP governors and PDP lawmakers at the National Assembly. The National Working Committee of the ruling party was also at the meeting.

Also, before their appearance at the meeting, Obi and Mimiko have in times past openly romanced with PDP and President Goodluck Jonathan. During the Nigeria Governors Forum chairmanship election last May, they both aligned with the position of the presidency and PDP in standing behind Governor Jonah Jang of Plateau State as the ‘authentic’ chairman of the Forum, which has been left polarized since the controversial ’16 is greater than 19’ debacle.

But in shooting down reports of their defection in separate reactions, Obi and Mimiko admitted to their closeness with President Jonathan, which they noted is in the interest of their respective states.

Mimiko’s Chief Press Secretary, Mr. Eni Akinsola, who spoke on behalf of his principal said, “There is no truth in it. The governor has said if he wants to align or realign politically, he will let the world know. To the best of my knowledge, the governor is contented with where he is right now”.

Shedding more light on the governor’s closeness with the PDP-led Federal Government, Akinsola said the rosy relationship between his boss and the president had not erased the political divide between the LP and PDP.

“The governor does not believe in criticising everything, just to be heard or to be popular; he believes in constructive engagement”.

In his own reaction, Obi, who spoke through his Chief Press Secretary, Mr. Mike Udah, said, “It is unfounded. It is unnecessary. It is inexpedient. There is no truth in it”.

On the close affinity between Governor Obi and the PDP, Udah said their closeness dated back to when the governor assumed office in 2006.

“This closeness, which was absent during the administrations of Obi’s predecessors, has paid off well for Anambra State and it did not require the governor leaving APGA to secure any further benefit to the state”, he said.

He listed the benefits to include the funding of the state-owned Ojukwu University, the Second Niger Bridge and the Akanu Ibiam International Airport.