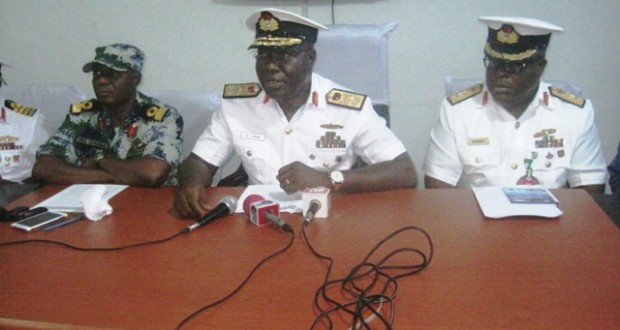 The constant flooding of the Nigerian Navy Barracks in Calabar, Cross River State after a heavy down pour has been bemoaned by naval authorities, who have pleaded with both the federal and state government to render assistance towards checkmating the situation, which is said to have worsened.

Speaking yesterday while inspecting units and ships under his command, the Flag Officer Commanding Eastern Naval Command, Rear Admiral Obiora Medani yesterday said several attempts by the Nigerian Navy to control the flooding and erosion in Akim Barracks had defied every effort.

“We have a military and civil authorities’ relationship and we have appealed to the civil authorities to help us because the scope of the erosion menace in that barracks is above our resources and we hope this will be done soon”, he said.

The naval chief lamented that year in year out, the Nigerian Navy has sunk in its meagre resources to combat the erosion menace, yet the flooding at the Barracks had only worsened, making it impossible to navigate large parts of the barracks whenever it rains.

He said: “The rains will soon set in and we hope something will be done soon to address the situation. On our part, we are doing the much we can to stem the tide of flooding in the barracks”.

On the state of facilities at the Eastern Naval Command, Medani said he was impressed with the state of preparedness of officers and ratings of the command to combat any form of militancy and piracy in the Calabar –Equatorial Guinea – Gabon waterways, assuring those travelling on that route of their safety.

He said in a few months time, the 100-bed Nigerian Navy Reference Hospital in Calabar will be ready for inauguration going by the fast pace of work on the project.

“The Nigerian Navy does not condone the abandonment of projects and I can assure you that being a point of reference, efforts are being made to bring life to the place and that will be very soon”, he added.