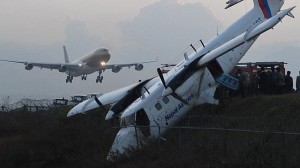 A Nepal Airlines plane carrying 15 passengers and three crew has gone missing shortly after take off from a popular tourist resort, police and an airline spokesman said.

A total of 18 people were on board, the 14 adult passengers, plus one infant and three crew, an airline spokesman said.

“One of the passengers is from Denmark,” spokesman Ram Hari Sharma told AFP. The rest of those on board are from Nepal.

The airline has alerted police to “find the plane’s location” and are “preparing for rescue operations,” Sharma said.

The state-run carrier was travelling from Pokhara to the town of Jumla, 353 kilometres west of the capital Kathmandu, when air traffic controllers lost contact with the pilot.

The incident highlights safety concerns about the Himalayan nation’s aircraft.

Nepal, which counts tourism as a major contributor to its economy, has suffered a number of air crashes in recent years, which have usually been attributed to inexperienced pilots, poor management and maintenance.

A Chinese tourist and a local pilot were killed when an ultralight aircraft crashed into a hill in the tourist town of Pokhara last October.

The European Union in December black-listed all the country’s airlines, citing their poor safety record, and banned them from flying to the EU. [AFP]