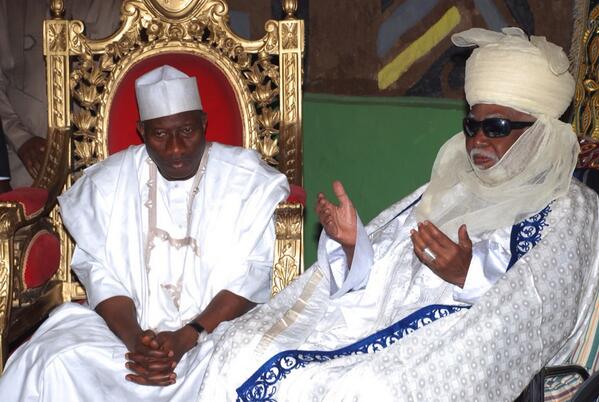 The Emir of Kano, Ado Bayero, on Saturday said the unity of Nigeria remains sacrosanct as he pledges that the traditional institution will continue to work toward keeping the country united.

The Emir spoke when President Goodluck Jonathan paid him homage in his palace in Kano.

The President was in Kano on an official visit to the Emir, who had taken ill and was recuperating.

Welcoming the President to his palace, the Emir, who spoke through an interpreter, said that “Nigeria is one and the Emirate will work with other traditional institutions to keep it indivisible”.

He commended the Jonathan administration for the efforts at keeping the country at peace despite daunting security challenges. He noted that nothing could be greater than peaceful co-existence and tranquility in the society.

Mr. Bayero thanked the president and the federal government for the solidarity and support during his travail and ill health. He assured the President of his support and that of the emirate in steering Nigeria.

Mr. Jonathan said he was in Kano to pay homage to the traditional ruler and to thank the emirate for the efforts at keeping Kano State peaceful.

He said his administration was always open to receive wise counsel and advice from the traditional institutions. He wished the Emir good health and called on him to continue to guide and encourage the political leadership.

Speaking to journalists at the palace shortly after the visit, the Governor of the Central Bank of Nigeria and a Kano Prince, Lamido Sanusi, said the Emir’s message was instructive and supportive.

“The position of the Emir is very clear. He is always praying for peaceful co-existence. The Emir said this is one country, one indivisible nation with one president.

“He said they will continue to support the president as he continues to work and create an environment in which every Nigeria will feel he belongs.

“I am sure that the message is encouraging and it is a message of support, prayers for peace and development and also for the unity and serenity of this country”, he said.

Earlier on arrival at the Aminu Kano international Airport, the president and his entourage was received by a state delegation led by the state Deputy Governor, Abdullahi Ganduje.