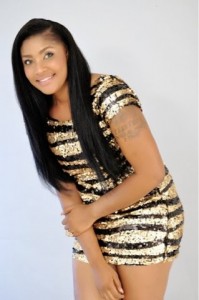 New day new Wahala, the latest is about our darling starlet; Angela Okorie, despite the fact that she is married to a certain Mr Chukwuma Orizu, sources close to me insist that Angela is big flirt and can sleep with anything under the sun, that’s she is always spotted on set flirting with any and every actor that’s on that set and recently she was spotted in a certain location busy flirting with guys including the owner of the house, they used for shooting, probably due to excessive drinks she has had that day, i heard Mr Yemi black (a nollywood actor) took advantage of her, started to kiss and caress her in public so many people got confused and was asking if she was divorced abi she was acting out a script.

When they noticed people were not staring they decided to go to a dark place to continue their ministerial work, sources told me.
They stayed there for long, infact the shooting for that day was over, before they decided to come out, on getting out, Yemi Black said he could not find his phone and started shouting, threatening fire and brimstone.
Bimbo Akintola who was present at the location decided to search everyone both men and women,
people felt so embarrassed including, Francis Duru who was angry at what Angela was doing with yemi that made him lost his phone, Emma Odili who happens to be the owner of the film decided to go check in the hid out where Yemi and Angela were playing and behold! he saw the phone there, every body got angry immediately for the embarrassment and laid the blame on Angela who wouldn’t control herself whenever she sees a male star.
Mouth are waggling that, Angela Okorie might be having extra marital affair, to make matter worst in her recent interview, when asked what was the most embarrassing thing a fan has ever done to her, this is what the sexy mother of one said;
“I was in a mall in New York, when a guy just walked up to me and kissed me, saying, ‘what are you gonna do? I’m so crazy about you, and excited seeing you live and direct.’ He then hugged me again. I couldn’t do anything…I just smiled.”
Sources are saying that, why would a married woman allow a man to kiss her, to the extend of hugging her without disclosing to the fan that she’s married?!
All is still speculations tho, would torch light more into this matter.
AdvertisementABUJA DOCTOR REVEAL THE UNIQUE WAY TO PERMANENTLY CURE WEAK ERECTION, SMALL AND SHAMEFUL MANHOOD AND INFERTILITY ISSUES WITHOUT SIDE-EFFECTS WITHIN SHORT PERIOD!! DON'T BE A VICTIM!! Click Here for More Details