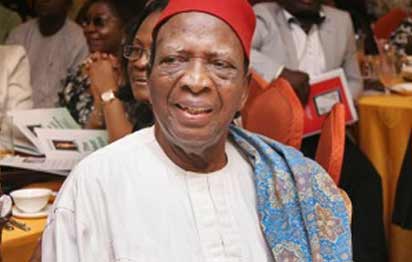 The apex pan-Igbo socio-cultural organization, Ohanaeze Ndigbo has asked foremost constitutional lawyer, Prof Ben Nwabueze (SAN) to grow up, live his age and be a statesman rather than dropping comments in the media that are capable of undermining the interest of the Igbo race.

The Anambra State chairman of the group, Elder Chris Eluemunoh, who made this known at a media briefing on Monday in Awka, the state capital, said that Prof Nwabueze’s comments of late were geared towards undermining the progress of Ndigbo, with the aim of supporting the Yorubas, who he alleged pays the elder statesman’s bills.

Eluemunoh said “Nwabueze’s comments are outright falsehood against Ohaneze and Ndigbo, and keeping quiet will mean accepting them. Since he is our son, and hails from this state, there is need for us to clear the air on his falsehood”.

“He is simply playing the music of the Yoruba people, there is no case in court concerning Ohanaeze, we are not divided and Chief Garry Igariwey remains our President-General.

“Nwabueze is a good constitutional lawyer who is selfish. He has grown and does not want anyone else to grow, but he should know that Igboland has good lawyers today”, Eluemunoh said.

The Ohanaeze Ndigbo leader also took a swipe at Governor Rochas Okorocha for purportedly parading himself as the new Igbo leader.

“What he is doing is a childish prank because he knows he will never become Igbo leader. The earlier he realizes this and stop selling Igbos to his Yoruba friends the better. Ohanaeze is not APC, so he should be advised to retrace his step”, Eluemunoh said.