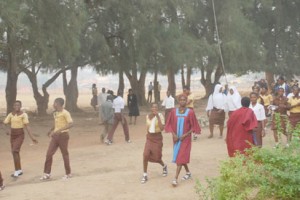 The Methodist Church of Nigeria, Abuja Diocese, has described the education reclassification policy of Osun State Governor, Ogbeni Rauf Aregbesola as the harbinger of confusion in the state.

The Archbishop of Abuja, Dr. Joseph Oche Job; and Lay President of Abuja Diocese, David Olatunji, faulted the Osun education policy at a news conference weekend to herald the inauguration and enthronement of Job as Metropolitan Archbishop of the Methodist Church of Nigeria.

“All I know is that there is confusion in the place and it is all coming out of religious biases. If you wear this, let me wear that and that is the confusion. But I think what I read has to do with dressing and the philosophy that has been introduced”, Job said.

Olatunji, an indigene of Imesi-Ile in the Obokun Local Government Area of Osun State, said, “On the situation in Osun State, you will see that recently, there have been lots of confusions that have crept in because now, you see the Muslims wearing Hijab and the Christians also going in to school in their Choir robes. There is a state of anarchy that is going on there in the area of education.

“We believe that, you know as far as Christianity is concerned, we believe in non-violent approach in resolving issues and at that level, they are taking it up with government and it will be resolved at the appropriate time”.

The crisis in the Osun State education sector reached a climax last week when students wore different religious garbs to school in apparent protest against the schools reclassification and merger by Aregbesola.

Under the new system, veil-wearing Muslim students are sent to Christian missionary schools; a development that had been greeted with angry reactions since its implementation began last year.