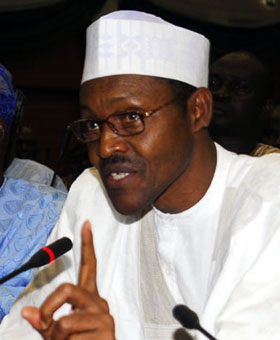 A former military head of state and presidential candidate of the defunct Congress for Progressive Change, CPC, General Muhammadu Buhari (rtd) has blamed the problems confronting the country on the twin evils of bad leadership and insecurity, which he said could be addressed by a shift in the style of those in positions of authority. He also urged public officeholders to be patriotic and govern well.

Buhari, who spoke at the maiden edition of the two-day international conference of Jammatul Izalatul Bidia Wa Ikamatus Sunnah (JIBWIS) held in Lagos on Saturday, also lamented the introduction of religion into politics.

According to him, “In the First Republic, I remember a gentleman, and till now I haven’t seen any other person with such virtues. When you look at Benue State today, it is strictly a Roman Catholic state; that was the place where somebody like the late Joseph Tarka brought someone from Borno State to contest and the person won.

“Chief Obafemi Awolowo was a Christian in his lifetime. I am old enough to know that was the first person to establish a Muslim Pilgrims Welfare Board that every state is now copying. Gentlemen, the problem we have in Nigeria today is the problem of leadership”, Buhari stressed.

Earlier, Sultan of Sokoto and the president-general of the Nigeria Supreme Council for Islamic Affairs (NSCIA), Alhaji Sa’ad Abubakar, absolved ordinary Nigerians of the blame for violence in the country, saying the political class are responsible for stoking the flames of hatred with their divisive comments and further accused them of not providing the right leadership for the country.

The Sultan, who was the chairman of the event, said “I don’t believe that Nigeria is passing through trying times. The common people are going about their daily activities as they do not have problems with one another. It is you the politicians that are fanning the ember of hatred through your utterances by saying ‘the country will explode’.

To the Sultan, leaders of all faiths must ensure that they do all they can to ensure that peace is  maintained in the country through proper education of their followers on the need to ensure peaceful co-existence of all Nigerians irrespective of their religious faiths.