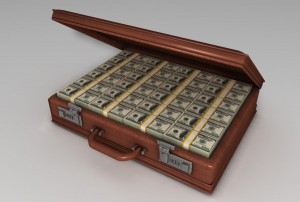 A passenger who had $1,909,140 (about N320 million) concealed in his luggage without declaring it to customs officials at the currency desk on arrival into the country has been arrested by the Murtala Muhammed International Airport Command of the Nigeria Customs Service (NCS).

Customs said his non declaration of the exact amount he came into the country with is gross violation of extant regulations as it affects the movement of large sums of foreign currency into Nigeria.

Mrs Thelma Williams, Public Relations Officer of the Airport Command of the NCS, who spoke to journalists after the arrest on Tuesday, identified the passenger as one Mr Ani Paulinus Onyeka, who came into the country aboard Asky Airlines flight from Democratic Republic of Congo.

According to her, the passenger did not declare the exact amount he concealed in his luggage, which was discovered after physical examination by customs personnel at the baggage hall of the airport.