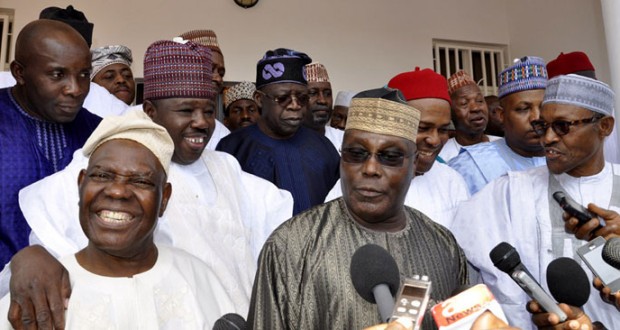 The leadership of the Peoples Democratic Movement, PDM, has refuted reports in a section of the media that former Vice President, Atiku Abubakar, who recently joined the All Progressives Congress, APC, directed all his supporters to do same.

Atiku is one of the founding fathers of the PDM.

The leadership of PDM particularly picked holes with the cover story of Weekly Trust of Saturday, February 15th, 2014, which gave the false impression that the directive emanated from the former vice president.

In a statement issued by the party and signed by its National Publicity Secretary, Ahmed Rufai Abubakar, PDM described the story with headline ‘Atiku collapses PDM into APC’ as “unprofessionally and mischievously planted by the Editors in order to create the false impression that the former Vice President was at any point a member of PDM and that he is in a position to collapse the party into another one. This cannot be further from the truth”.

PDM explained that as a political party registered under the law, it cannot collapse into another political party on the pages of newspapers or by the wish of Editors, who it said have no regards for professionalism.

Abubakar urged the Editors of Weekly Trust “to familiarise themselves with the provisions of the Electoral Act 2010 (as amended) before going to press with the outlandish caption referred to above”.

He further said PDM and its members nationwide are embarrassed by the story as it is totally false and appears to be a hatchet job.

Continuing it said, “This is especially so considering that all the Editors of Weekly Trust needed to do to verify their facts was to place a call to officers of PDM or officials of INEC before going to press.

“The Executive Chairman, the Managing Director and the Editor-in-Chief of Media Trust, owners of Weekly Trust and the National Chairman of PDM had cause to be under one roof for more than three hours on Thursday, February 13th, less than 48 hours before their paper went to press.

“There is absolutely no professional excuse for the paper to go to press with the story without hearing from PDM through our National Chairman”, he said.

“We urge the media, as the custodians of a sacred trust, to only report that which is true without sensationalism and bias. Reporting falsehood does not serve any purpose other than to undermine the credibility of the profession of journalism as a whole.

“We hope the Editors of Weekly Trust will find it honourable to retract the story under reference and apologise to PDM and its members nationwide”, the statement concluded.